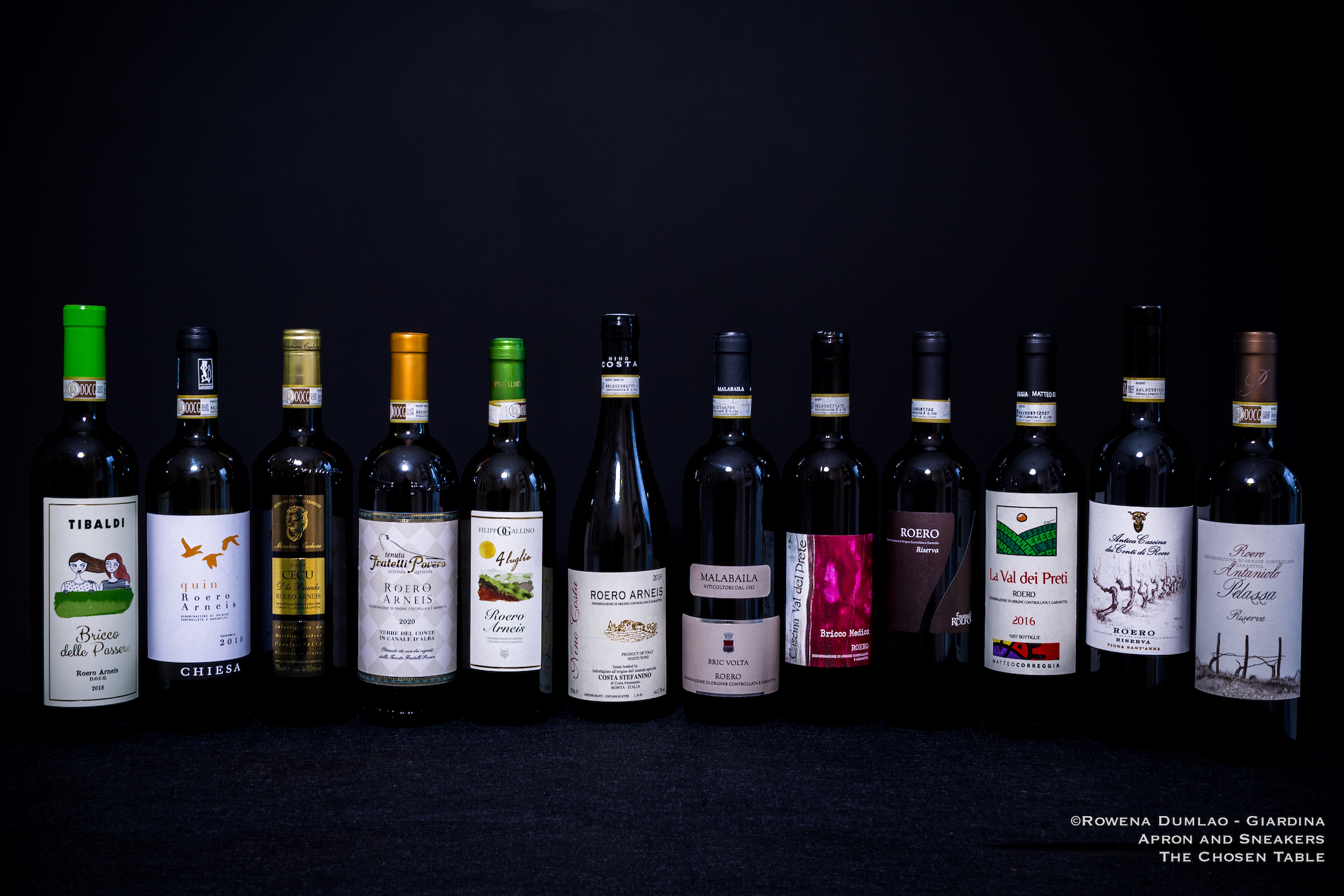 Nebbiolo and Arneis of Roero DOCG of Piedmont, Italy: Why They’re in My Glass

Piedmont ranks the first in having the most number of DOCG (Denominazione di Origine Controllata e Garantita) wines in Italy, which pertains to the excellence of quality and authentic viniculture representative of the region. A wine with this denomination signifies a particular qualitative value that is cultivated and produced from specific grapes cultivated in designated viticultural areas. Piedmont can be internationally known for its most popular wines like Barolo and Barbaresco but out of the many other denominations in the area, Roero, also made with Nebbiolo grapes, has a completely different identity with its distinguishing aromatic characteristics which are given by geographical and climatic conditions, as well as vinification techniques.

The geographical position and the composition of the soil distinguishes Roero from its counterpart as Roero is located on the left bank of the Tanaro River while Barolo and Barbaresco are on the right. The area of the left side is varied, coexisting with fruit orchards, woods and vegetable gardens which signifies a richness in biodiversity as opposed to the more monocultural landscape on the right side of the river, where vineyards are more prevalent. Dating back from 130 million years ago, the soils in Roero were formed by sedimentation of detritus of various lithological origins which were transported by marine currents that had eroded the surrounding mountains which have structured in layers. It was from two to three million years ago that the hills of Roero were formed due to the emersion from the sea and this push led to the overlapping of the various types of soil in the area.

The soils of Roero are mainly of marl with a predominant presence of sandstone of marine origin, a good content of limestone, clay and sand which makes the soil loose and confers softness and great permeability. The marine origin of the soils makes them poor in organic matter but rich in mineral salts. From a climatic point of view, Roero is considered a semi-arid area which leaves the hills almost devoid of water. Whereas the Maritime Alps provide significant diurnal temperature variations between day and night. This large gap of high temperatures at daytime and low temperatures at night time which affect the ripening of the grapes in a more balanced way. Warmer daytime temperatures fosters sugar development while cool nights can help reserve aromas and acidit

The appellation of Roero DOCG, recognized in 2005, is reserved for Roero Arneis, Roero Arneis Riserva and Roero Arneis Spumante which are both made from 100% Arneis grapes or 95% in some cases with the remaining 5% from non-aromatic white grapes like Favorita (Vermentino in

local dialect) or Chardonnay which are grown in the same area. The red versions of the appellation are Roero and Roero Riserva which are both made with 100% Nebbiolo grapes or at least 95% with the remaining 5% from non-aromatic red grapes like Barbera cultivated in the same area. Although nowadays, a lot of the wineries produce the Roero wines solely with Nebbiolo or Arneis grapes.

As of the year 2017, after eight years of research and work, the new regulations of the DOCG include 135 newly-recognized Menzioni Geografiche Aggiuntive (MGA) or Additional Geographic Mentions. It identifies specific important wine growing areas like a group of vineyards that have had a long-standing reputation for producing high quality wines, elevating them to the status of real crus. These new MGA names are reflected in the wine labels to identify that those certain bottle comes from a recognized cru for its exceptional quality.

Arneis is an autocthonous grape variety of Piedmont that has been cultivated for centuries. However, the first documented mention of this grape was only between the end of the 15th and the beginning of the 16th centuries in the forms of Reneysium and Ornesium in reference to a vineyard called Moscatelli et Renexij (in current times known as Canalese Renesio) where the grape was cultivated. The name Arneis only appeared at the beginning of the 1800s in the accounting records and referred to as “white Arneis”. Arneis is known to have a number of synonyms, the most popular being Bianchetto, Barolo bianco and Nebbiolo bianco. Historically, in the vineyards, Arneis was often planted with the Nebbiolo vines with the aim of using the sweet scent of the ripe Arneis berries in attracting the birds and distract them from the more valuable late-ripening Nebbiolo clusters. Also, the Arneis grapes were previously used to soften the tannins and the harshness of the Nebbiolo grapes in the production of the Barolo wines, hence the name Barolo bianco and Nebbiolo bianco. But in the 1970s, its cultivation in the hills of Roero has gained momentum when producers realized its great potentiality as an excellent white wine with pleasant drinkability.

Roero Arneis is generally a straw yellow dry white wine notable for its crisp fruity aromas of pears and apricots with white flowers like jasmine and fresh herb accents, minerals and sometimes an aftertaste of green almonds. When the four-month vinification process is simple and immediate, the color is light straw yellow color with some green highlights and focused on its varietal characteristics and freshness. Whereas if the wine went through a short maceration with the skin, aged on lees or went through a brief passage in oak barrels spending at least 16 months in the cellar, the color turns more towards medium golden yellow, full-bodied, with the development of more complexities in its characteristics like honey, exotic fruits, and orange blossoms. With this ageing process, the wine gains the possibility for a good ageing potential for years.

Nebbiolo is another autochthounous grape of Piedmont which was first written about at the end of the 13th century. Records dating back from the 17th century show that there has been an active production of wines made with these grapes in varied forms from dry to sweet wines. Over

the centuries it became the most appreciated red grape variety in the area and it has maintained its dominant presence in the vineyards, exclusively in the hilly side where it gets the best exposition to the sun. The predominantly sandy soils in the Roero give the wines an elegant structure with soft tannins giving the Roero more readiness in its drinkability without compromising the characteristics that make it suitable for ageing. The ageing for red Roero should spend a minimum of 20 months in the cellar which includes 6 months in oak barrels while for the Riserva, the minimum time is 32 months with 6 months in oak barrels. However, most winemakers keep their wines longer in the ageing process.

The question that often pops up is what’s the difference between the world-famous right bank wines, Barolo and Barbaresco with its left bank counterpart, the Roero. Differences in geographical, climatic and vinification factors set these wines apart. All three wines use 100% Nebbiolo grapes for their production, Roero has the flexibility of using a minimum of 95% less, blended with other varieties (but almost all producers use 100% Nebbiolo nowadays) plus the ageing of Roero is also shorter than those of Barolo and Barbaresco. The sandy soils in Roero gives a typical Roero delicateness, mineral and fruity characteristics, elegant structure and soft tannins as compared to the deeper flavors and more tannic structure of the Barolo. The Roero doesn’t need to be aged for a long time to reach its full potential as a great wine because it can already be enjoyed starting from a younger age while the Barolo and Barbaresco blooms to their full maturity slowly over the years when cellared. So if you want to enjoy a bottle of excellent red wine of Nebbiolo from Piedmont without waiting for years to reach its apex and with a more approachable price range, Roero is the right choice. Its drinkability is enjoyed at a larger frame of time, between two to fifteen years.

Consorzio di Tutela Roero, the consortium of Roero vine growers and winemakers, that was founded in 2013 and headed by Francesco Monchiero, is responsible in protecting and promoting Roero DOCG, both white and red. It now represents 236 members, 155 of which are wineries and 81 are vine growers. The cornerstone of the consortium’s activities is the valorization of the Roero territory and its symbolic wine. With the transformation of the landscape, shaped by the presence of vineyards, it was included in the Unesco Heritage Cultural Landscapes in 2014 together with Langhe and Monferrato.

With the unusual circumstances that the world is facing because of the pandemic, a virtual wine tasting is becoming the new normality in this challenging period. Nonetheless, the consortium was able to reach out to a number of us in the wine sector to taste twelve of their members’ wines and for the winemakers themselves to present their corresponding wines. There were 12 bottles of Roero Arneis, Roero and Roero Riserva from: Antica Cascina dei Conti di Roero, Nino Costa, Tibaldi, Cantine Povero, Pelassa, Monchiero Carbone, Matteo Correggia, Malabaila di Canale, Filippo Gallino, Cascina Val Del Prete, Carlo Chiesa, and Cà di Cairè.